Jimin’s Flower Bridal Wreath has hidden meaning that BTS knows and kept on Laughing whenever they called it and making him flustered.

On April 7, Ep 99 of RUN BTS released with a unique style. BTS was held in the supervision of Florist to make Flower assortments and Boutonnries. Here BTS discovered their Birth flowers for the first and the meaning it contains

RM’s Flower is Clematis which means “Inner Beauty”, fits so well to him as he has a Most beautiful and sincere heart.

Jungkook’s Flower is Tiger Lily which means “Please Love Me”.

Suga’s flower is Larch which sounds the same in Korean as “Dead Leaves” a song by Suga under his Album August-D. It symbolizes long life and has the meaning “Boldness and fearless”.

But it Was only Jimin’s Flower that turned out all members into laughter because His Flower name is “Bridal Wreath” which sounds similar to something else [A Hidden Cursed Word] in Korean. which is 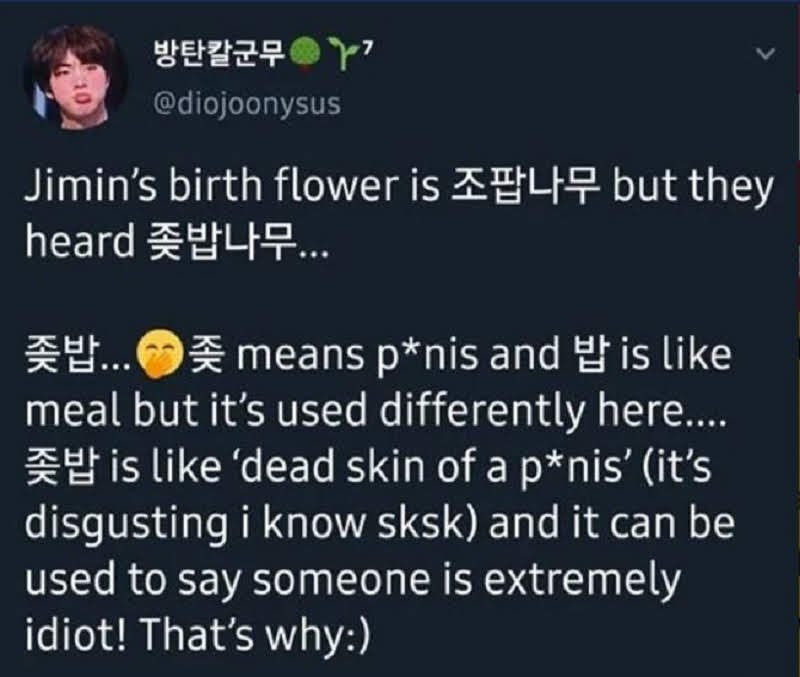 So, he was flustered and tried to make the situation normal by stopping everyone from laughing

“If You Laugh it makes the situation weird, Hey Don’t laugh, Don’t laugh”

But it seems difficult for members to bring to an end.

RM handled this hilarious situation by changing the topic. He asked the Teacher is Bridal Wreath a tree or Flower? and what’s its meaning? Flower’s meaning is “Neat Love” a great match as Jimin has a neat personality and members of BTS praised it that. But Jimin wasn’t over yet and said

“My part is going to be edited out”

But it was made on it. The florist added that “Bridal Wreath is a common Spring flower and can be seen on streets”. His statement again turned the situation into an amusing one. As BTS members again started to laugh teasing Jimin by saying

“What, what, what. I was just listening.”

But they kept on laughing and teasing him showing their Best Love to each other.

So What your Birth Flower? Check Here.

Suga’s Canvas Turned Out As A Meme Board For ARMY

It seemed that Suga had been enjoying making some artistic things during his quarantine period but ARMY is more than him! On April 24 KST, BTS’s Suga hosted Surprise Live Stream on YouTube while painting a Master Piece and giving out details of BTS’s New Album which is Jungkook’s biggest wish. Fans are amazed at Suga’s painting skills, […]

In Seven years long Journey towards success, BTS proved that indeed Teamwork Makes The Dream Work! On September 8, an announcement made all fandom alongside BTS went frenzy that BTS spends 2nd week on Billboard Hot 100. They are the First Group in the century to rank for two consecutive weeks.   Within a half-hour of […]