Due to COVID-19 Pendamic, Students Can’t attend Schools and Graduation Ceremonies, But for this Virtual Celebration like Dear Class of Youtube are arranged to give honor and respect to those Students who have been Graduated during this difficult time. 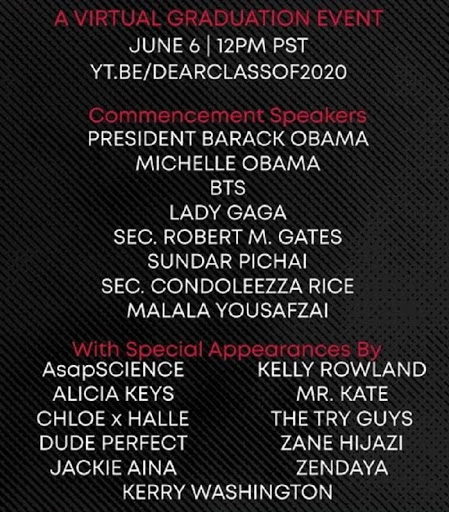 But BTS Jungkook is having his good time of graduation again in 2020, Thanks to ARMY.

Not long ago ABC7 (News Station) Highlights the Viewer’s Submitted Student Photos and Names to cheer them on their Graduation.

Shortly, the Station Noticed too much great Response on Twitter From BTS’s Fans and realized their mistake, So they Replied in the best way.

On May 28, ABC7 reporter George Pennacchio Talked about Army’s Prank, He described it as:

“We love bringing you photos every day of our graduating high school seniors. And from the more than 8,000 submissions we’ve received, one got through that shouldn’t have; and it sure caused a social media sensation!”

“Someone sent in a picture of a young man, suggesting he was a graduate from Rowland Heights. Well, he is actually a member of the hit South Korean supergroup, BTS, Jungkook Jeon.” — George Pennacchio

As Channel didn’t want to Slight other BTS members So they also added them to the Graduating class of 2020.

“As soon as we aired it, their fans known as #BTSARMY started having a field day, racking up tens of thousands of likes on Twitter. We didn’t want to slight the other members of BTS so with a little help from our friends in the ABC7 graphics department, we put ALL the guys from the group in graduation attire.”— George Pennacchio

BTS Jungkook Apologized For Itaewon Visit Controversy Back From April

BTS Jungkook Apologized for his Act. As Jungkook was criticized in April for the fact that he visited Restaurants and Entertainment Facilities in Itaewon along with Seventeen‘s Mingyu, NCT‘s Jaehyun, and ASTRO‘s Cha Eun Woo. It was seemed by people as an incautious act being an Idol. Although Jungkook and Big Hit Entertainment Apologizes for this act back then which was revealed […]

BTS’ V & Peakboy Teases Fans With ‘Hearty Selcas’ Are they working on KTH1?

BTS Taehyung and Wooga Squad member Peakboy have left us speculating if they are working on KTH1 with their recent selcas! It took us full two minutes to stop screaming and actually get down to reporting this epic selfie. BTS Taehyung shares a brotherly bond with Wooga Squad members constituting South Korean stars Park Seo […]